Rolex GMT-Master II has been around for decades, and it has evolved into a stunning timepiece. With iconic colorways and advanced functionality, the GMT Master series has won a special place in the hearts of watch collectors and enthusiasts alike. 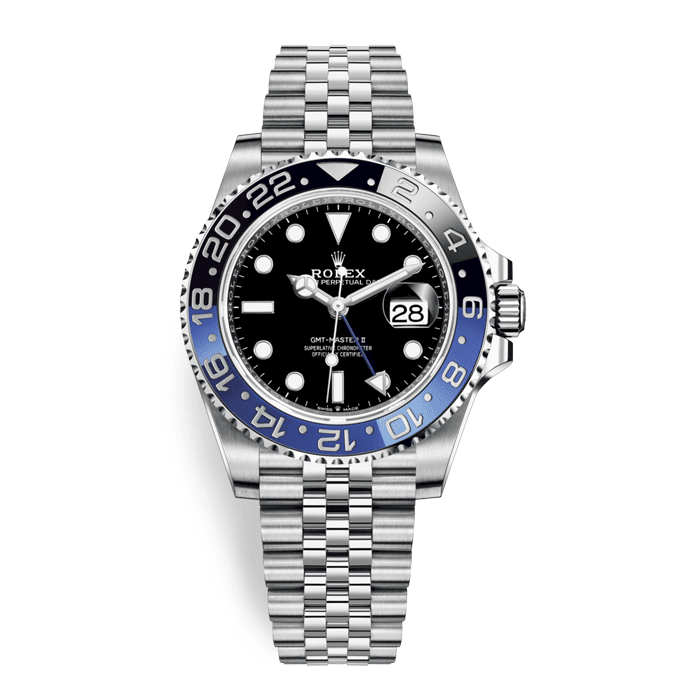 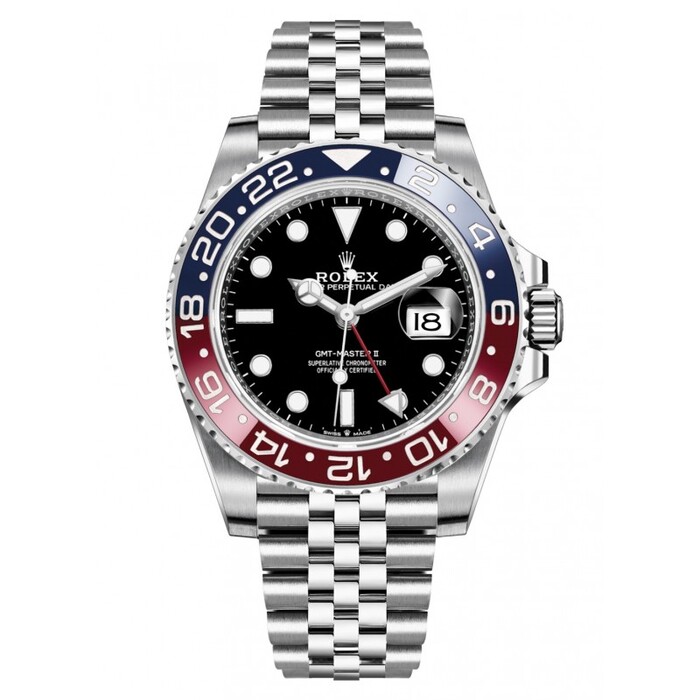 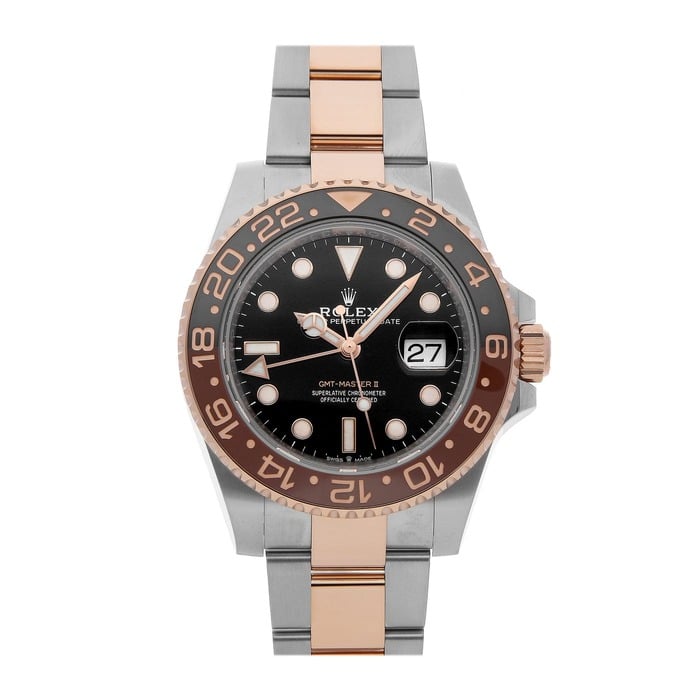 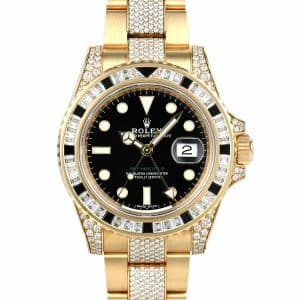 First released in 1954, the GMT Master has always had a modern and elegant look. The original reference 6542 came in the iconic Pepsi colors. The red and blue bezel greatly contrasted against the black gilt dial and the prominent luminous hands. Even though the color combination is now referred to as Pepsi, it was originally commissioned by Pan-Am airlines.

The idea for the incredible timepiece came from the pilot’s demand for a tool to help track multiple timezones at once. At the time, Pan-Am airlines started taking transatlantic flights and they had already made it mandatory for pilots to wear accurate wristwatches. Rolex developed a solution for this and that is how the GMT Master was born.

In the original reference 6542, the 24-hour hand was directly linked to its standard hour hand. The pilots could use the rotating bezel to adjust the time zone on the fly.

In 1964, the original 6542 received a new nickname. The watch appeared on the wrist of a core character in a 1964 James Bond movie dubbed Goldfinger. After its appearance, the automatic timepiece received the nickname ‘Pussy Galore’ from watch collectors and enthusiasts.

Rolex GMT Master watch was due for an update by 1959 and that is when Rolex introduced the reference 1675. One of the most noticeable changes was the inclusion of the crown guards, which was missing on reference 6542. Crown guards are a part of the Rolex case design that helps keep the crown from digging into the wearer’s wrist.

Increasing the legibility, the pointer of its 24-hour GMT hand also increased compared to the 6542. Besides that, the watch’s case size remained 38mm and the bezel still used the iconic red and blue color scheme.

During the era of the reference 1675, the Swiss watch manufacturer introduced a couple of other colors as well. There was an all-black model, which featured a black bezel and a black dial. The rare blue-bezel GMT Master II was also known as the “Blueberry GMT.” There was also the “Rootbeer GMT” with a gold case.

With the reference 1675, Rolex also brought the concept of the combination of a sports watch on a jubilee bracelet.

Before releasing the GMT-Master II, the Rolex GMT Master watch received its last update in 1980. The GMT-Master reference 16750 brought the updated caliber 3075 movement. It increased its running speed up to 28,800 vibrations per hour. The new timepiece had a larger 40mm case and it also brought the quick-set function.

Unlike the GMT-Master, the new GMT-Master II’s 24-hour GMT hand could be set independently of the home time. Interestingly enough, these adjustments did not stop the functioning of its second hand. This new functionality proved useful for frequent travelers.

GMT Master II also brought a new nickname with its red and black bezel. The model was referred to as the Rolex GMT-Master II Coke. It was also nicknamed “Fat Lady” due to its beefier case.

Modernisation of the GMT Master II

With the modernization, a new Rolex GMT-Master II 116710BLNR was released in 2013, bringing the beloved blue and black bezel. The particular variant is more popularly known as the GMT Master II Batman. In the following year, the Swiss watchmaker also introduced a white gold cased GMT Master II Pepsi.

Throughout modern time, the Rolex GMT Master-II was powered by the caliber 3186 offering modern technologies like the Parachrom hairspring.

With the GMT-Master II series, Rolex has always been pushing the boundaries of innovation. This has made the watch a favorite among watch enthusiasts and collectors alike.

Many people believe that the Rolex GMT Master watch models come with a two-tone bezel to depict the day and night difference. That was never the case. Basically, Pam-Am requested that the wristwatch should have an aviation vibe. So, Rolex went and mimicked the look of the Attitude Indicator (AI) present on airplanes. The indicator indicates the sky in blue and the ground is reddish-brown.

All the nicknames Rolex GMT Master enthusiasts should know

Nicknames are associated with a lot of watches from various brands thanks to the huge watch community. It is slightly more popular among Rolex enthusiasts. While most of the Rolex GMT Master models have got their nicknames from the colorways, there are certain nicknames that have taken inspiration from elsewhere.

Here is a list of all the GMT Master nicknames one should know about:

One of the most popular nicknames is Rolex Pepsi. It refers to the Rolex GMT-Master II with a blue and red bezel. Notably, it was also the original colorway of the GMT-Master. The bezel was first launched in Bakelite but was later replaced by aluminum.

Rolex GMT-Master II ref. 116710BLNR was launched in 2013 and it brought the impressive blue and black bezel. Rolex fans quickly gave the watch the nickname, “Batman”. With the release of the GMT-Master II ref. 126710BLNR, the Swiss watchmaker offered the Blue and Black bezel on a Jubilee bracelet and that variant is referred to as the “Batgirl”.

Apart from Pepsi and Root Beer, Rolex has one more GMT Master with a soda-themed nickname. Released in 1983, the first GMT Master 2 came with a red and black bezel and it quickly picked up the nickname “Coke”. Even though it is not a part of the Rolex catalog now, it has been a fan favorite.

The Rolex GMT-Master II ref. 16760 came with an updated movement resulting in a thicker case. The beefier case paved way for the nickname “Fat Lady” due to the case profile. The movement allowed two time zones to be set independently on the GMT Master II. The ref. 16760 also received another nickname, the “Sophia Loren.”

Being around for over 60 years, the Rolex GMT Master has evolved considerably. Over the years, the timepiece has received several updates until it became what it is today. The fan-favorite watch has been available in quite a lot of different options with the introduction of various references. Rolex now offers the GMT Master 2 in different materials and it can be paired with your choice of bezel and bracelet.

Here are the options available:

There are not many dial choices in the GMT Master 2. If you are picking up the timepiece in Oystersteel, Everosegold or the combination of Oystersteel and Everose Gold, you will only get the black dial. However, if you pick up the watch in White Gold, you can choose between the Midnight Blue and the Meteorite dial.

If you decide to pick the Rolex GMT Master-II in Oystersteel, you have three options for the bezel. You can get the iconic red and blue bezel also known as the Pepsi. The model is also available with the Batman bezel, which features black and blue colors. There is also a green and black bezel available.

The configurations mentioned above are for the watches available right now. This might differ for older models. Also, if you would like to make your GMT-Master II look the way you want, you can always opt for customization services at WatchMaestro.

Here are the options available at WatchMaestro:

If you want to buy Rolex GMT-Master, you can buy one, either brand-new or pre-owned, from WatchMaestro. Many of the watches available in our store are in brand-new condition, and they all come with original box and paperwork. Our team can also help you out if you have been looking for a particular GMT Master II reference model.

Sell or exchange your GMT Master

In case you already own a GMT-Master watch, you can now sell it to make some profit as these tend to go up in value. You can even exchange your GMT-Master for another premium high-end watch. The watch trade also works if you have been looking for a GMT Master watch in exchange for your other luxury watch.

Service or customize your GMT Master

Apart from buying or selling the watch, you can always come to WatchMaestro to get your GMT Master-II serviced. From regular service to polishing and cleaning, we offer all kinds of watch services to help your GMT Master II run smoothly. Also, you can customize your watch if you want to make it look different than the others.

Which is the most expensive Rolex GMT-Master II?

Rolex GMT-Master II Ice is one of the most expensive GMT Master watches. The timeless piece would set you back a whopping $485,350 (roughly AED 1.78 million).

Where can I sell my Rolex GMT-Master II in Dubai?

You can easily sell your GMT Master watch in Dubai via WatchMaestro. The whole process is completely hassle-free and you will get a great value for your watch.

Is it better to buy a Rolex GMT-Master II from Dubai?

Yes. Due to the lower taxes and better availability of luxury products, you can get a better deal on purchasing the Rolex GMT-Master II in Dubai. Moreover, with WatchMaestro, you can get a sense of safety and get the best deal possible.

Can I get unique customizations on my Rolex GMT Master in Dubai?

Absolutely. With WatchMaestro, you can get your existing Rolex GMT-Master II customized the way you would like. 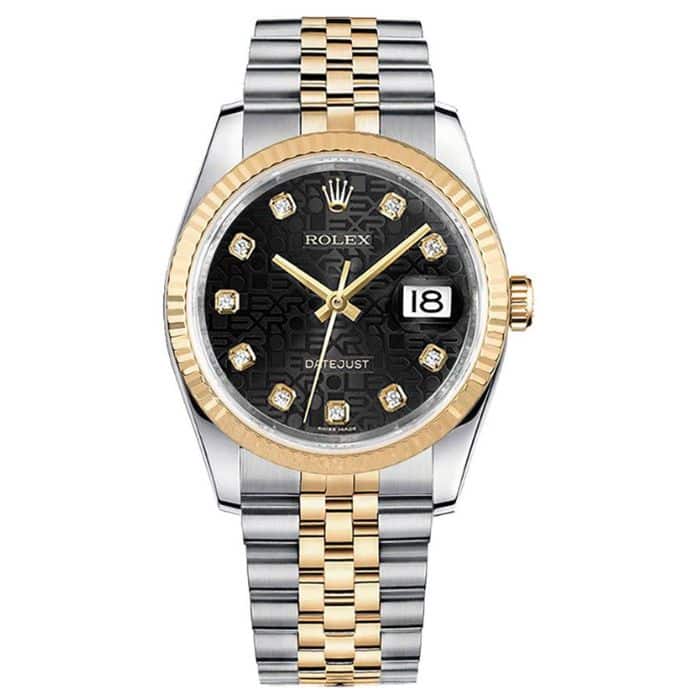